GLOKEN celebrated its 6th anniversary on June 29th.
In welcoming our 6th year, we began a crowd-funding project to make Kendama World Cup larger than ever. We embarked on new challenges like holding preliminary rounds in different parts of the world. We deeply appreciate all of the support and cooperation from all of you.

LEGAXIS, designed hand in hand with GLOKEN and Yonemura Mokko. “KOI FISH”is the newest series inspired by the stunningly colored Japanese carp (Koi). The Minimalistic design features colors from the fish and a laser engraving representing the fish’s scales. It is sure to please the eye. It comes in two colorways, the black/red/white “SANSHOKU” and the black/yellow/ white “KIUTSURI”. Minor adjustments have been made on the Ken’s shape as well, making it even easier to use. 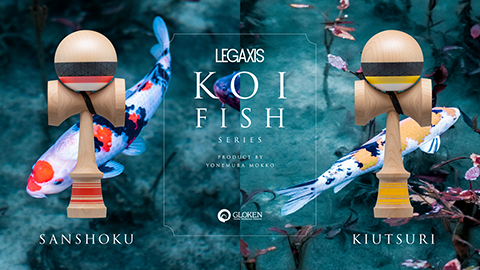 GLOKEN teamed up with Horiuchi Woodcraft Company to produce a new Sanga Kendama. The name of this new series, “HASUKAI” is derived from the traditional Japanese word for “diagonal”. The top half of the tama features layered wood stripes cut at 45 degrees and the bottom half is kept natural. A different wood is also used for the base cup, creating a stunning Kendama packed with mosaic woodworking craftsmanship. The minor changes to the base cup and tama hole adds to the playability of this piece. Along with this release, we have also revamped the Sanga logo.
Manufacturer: Horiuchi Woodcraft Company
Under the supervision of Global Kendamas Network.
Release: July 21st at Kendama World Cup. 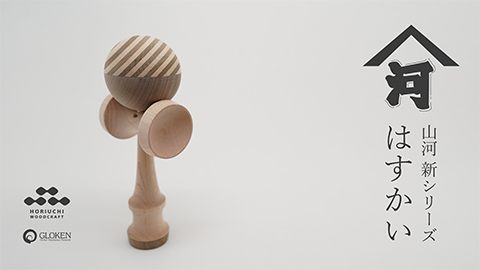 DENDAMA is a modern innovation in Kendama. It connects to your phone and allows you to connect with Kendama players around the world, making it the world’s first Smart Kendama. DENDAMA has newly come under the supervision of GLOKEN. DENDAMA has been revamped completely into “DENDAMA Ver. 2”. Starting with the shape, we reviewed the entire product. Originally, the shape was large and clunky in order to house the infrastructure, but we have carefully designed into the shape of a normal-sized Kendama to improve trick performance. The DENDAMA logo has also been renewed.
DENDAMA Ver.2’s first release, “Gummy” features a pop colorway like gummy candies.
Manufacturer: DENDAMA Co. Ltd.
Under the supervision of Global Kendamas Network.
Release: July 21st at Kendama World Cup. 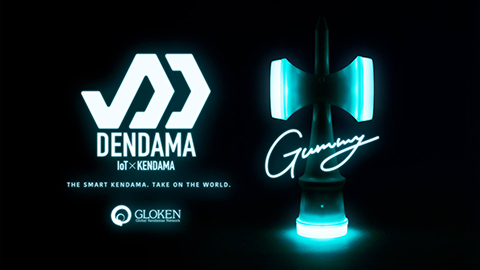